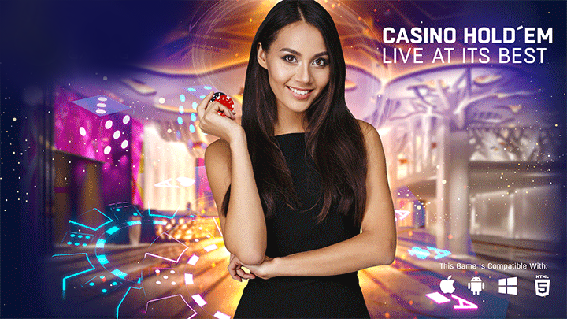 The Casino Hold’em goal is to beat the Dealer’s hand. Both player and dealer receive two cards in the beginning. Another five flop cards are dealt during the game. The best poker hand wins. The hand is standard and consists of five cards. As long as each player has two cards of his own and five – shared, only the highest combination, of five from these seven, counts. The hands are compared in the end of the game.

The rules are as follows.

Casino Hold’em starts with Ante bet. You enter the game with this bet. When ready with your Ante bet. The first step is to receive two face-up cards for you, two hidden – for the Dealer and three flop cards – again with faces up.
After receiving your two cards and the three “flop” cards, you have to evaluate your hand and choose among the following:


When all the five flop cards are on the table, the Dealer’s cards are turned over. Your best hand is formed by a combination between your own two cards and the five flop cards. It is the same with the best Dealer’s hand. The hands are compared to each other and the highest one wins the game.
You might make an additional bonus bet – called AA bet. To make an AA bet: first, you have to determine our Ante bet; then click the AA circle, where you put the bet. AA bet counts your two own cards and the three flop cards, dealt on the first round of the game. AA bet is not related to the other dealing results. You might lose the game, but the AA bet might win or vice versa
Game outcomes

Royal Flush - Consists of Ace, King, Queen, Jack and 10, all of the same suit.

Straight Flush - Consists of five cards in sequence, all of the same suit (the Ace might be the weakest card).

Four - Consists of four cards of the same denomination, one in each suit.

Flush - Consists of five cards of the same suit.

Straight - Consists of five cards in sequence of any suit (the Ace might be the weakest card).

Three - Consists of three cards of the same denomination and two unmatched cards.

Two Pair - Consists of two sets of two cards of the same denomination and any fifth card.

One Pair - Consists of two cards of the same denomination and three unmatched cards.

High Card - Made of any five cards not meeting any of the above requirements. 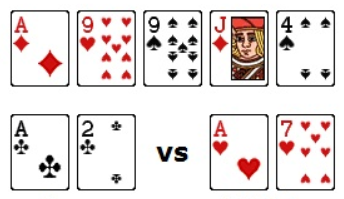 The 7 ♥ wins over the 2 ♣ having the same pair due to the value of the 7.
The comparison continues until the fifth cards are compared.
Note that sixth and seventh cards are not taken in consideration when determining how high the hand is. Your best hand might consist of only one of your own two cards and four of the community cards, even the best hand of a player might consist only of community cards.
Main UI functions
Game Info – includes the following information:
TableID which indicated the physical number of the table in the casino.
Player Name. Indicates the name of the player
Transaction ID – this is the unique round ID and in case of any questions or dispute it is required to indicate the round ID.
Limits. Indicates the limits of min and max of the table.
Chat – allow players to write text message to the dealer and chat with other fellow players.
Limits – the limits table give the player indication about the minimum and maximum be values allowed on each of the playing board betting spots.
Full Screen – by clicking this button (or on the center of the video screen), player can choose if to enter full screen mode (F11), additional click on the same button or on Esc button will revert the game to regular screen mode.
Sounds on / off – give players the option to mute / unmute the UI sound and live video audio sound.
Game History – clicking this feature will open a web page on top of the game UI which will display the player the latest rounds results as well as the player betting history.
Payouts