Baccarat is a simple game three types of bets:

Though the game is simple, baccarat follows strict dealing rules.

Live Baccarat is played from an six-deck shoe.  All face cards and 10s have no value.  Cards less than 10 are counted at face value, Aces are worth 1.  The suits of the cards don't play a role in the game.  Only single digit values are valid.  Any count that reaches a double digit drops the left digit.  15 is counted as 5 and 25 is also counted as 5.  Each hand is consisted of no more than three cards, the baccarat rules do not allow a fourth card to be dealt under any circumstances.

To start, the players bet either on Banker, Player or Tie.  Both Player and Banker pay even money, but a winning Banker bet commands a 5% commission.  A Tie bet pays 8:1.  The goal in baccarat is to reach a point total of 9 with your hand.

Player's Third-Card-Rule
If either the Player or the Bank have a total of 8 or 9 on the first two cards no further cards are drawn.  The resulting hand is called a Natural and the hand is over.  If the Player's total is less than or equal to 5 the Player's hand draws a third card.

Bank's Third-Card-Rule
If the Bank's total is 2 or less then bank draws a card, regardless of what the player's third card is.

If the Banks total is 3 then the bank draws a third card unless the Players third card was an 8.

If the Banks total is 6 then the bank draws a third card if the Players third card was a 6 or 7.

If the Banks total is 7 then the bank stands.

After the dealer has followed the third card dealing rule, the hand is closest to 9 without going over is announced the winner. 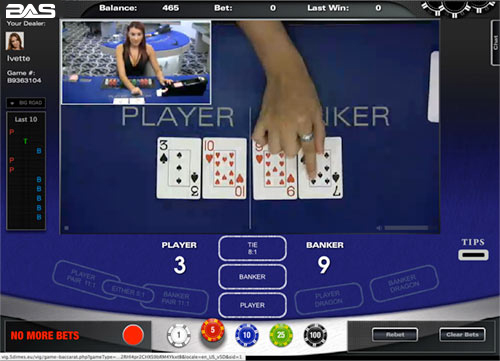